HAPPY HALLOWEEN: Do You Enjoy Being Scared? 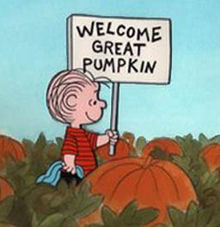 I have always liked Halloween.  As a kid—back before razor blades and such other atrocities worried parents—we would wander the neighborhood having a great old time.  I always appreciated It’s the Great Pumpkin, Charlie Brown (1966).  But now, years later, Halloween festivities seem a bit different.  There are more planned parties and haunted houses to attend.  Some neighborhoods report that trick-or-treating still goes on, often to hundreds of kids in costume who seem to be bussed in from some other neighborhood.  It is a different world.

I do like to see the kids in their costumes, but no trick-or-treaters have wandered to my door over the last several years. And since I do not have my own kids, I am not attending the Safe Halloween Party hosted in Bakersfield at the Kern County History Museum. I thought about attending a midnight viewing of The Rocky Horror Picture Show (1975).  It is being shown in town at the historically refurbished Fox Theatre.  But, been there, done that.  So I am not heading out to see that movie again this year.  Instead I am staying home trying to decide what to watch that would have an appropriate Halloween theme.

I am not crazy about horror or slasher movies, so many of the logical choices for my night’s viewing are not even being considered.  I am avoiding the various iconic movies or series such Halloween (1978), Child’s Play/Chucky (1988), The Shining (1980), The Texas Chain Saw Massacre (1974) and A Nightmare on Elm Street (1984).  Even the Scary Movie (2000) series is not the best for me since I have not seen the original movies being spoofed.  I’m also not looking for lighter fare such as Halloweentown (1998), the first of a 4-part series of Halloween films by Disney or even Hocus Pocus (1993), no matter how much I like Bette Midler.  I do like psychological and supernatural thrillers as well as some space invasion films—it must be the fun of being scared!

Here are the various mini-marathons I am contemplating for this evening’s viewing pleasure.  I better make a decision soon!

War of the Worlds Extended:  Listen to the original 1938 broadcast and then watch the original film version from 1951.  Then for a quirky treat, end the series with The Adventures of Buckaroo Bonzai across the 8th Dimension (1984)—there is a story-line connection.  Trust me!

Fright Night:  Frankenstein (1931), Bride of Frankenstein (1935), Young Frankenstein (1974) and for an encore The X-Files episode “The Post Modern Prometheus” (Season 5, Episode 5).  You could even add Twilight Zone’s “Eye of the Beholder” (Season 2, Episode 6) and Mask (1985) for a link to connections about how we perceive monsters.

Twilight Zone Double Take:  The original TV show episodes “It’s a Good Life” (Season 3, Episode 8); “Kick the Can” (Season 3, Episode 21); and “Nightmare at 20,000 Feet” (Season 5, Episode 3) followed by Twilight Zone: The Movie (1983).  Of course, the best part about the movie is the prologue and epilogue sequences with Dan Aykroyd’s “Want to see something really scary?”  If you do not want to spend all night on this, watch the two versions of “Nightmare at 20,000 Feet.”  It’s hard to say who plays the part of the frightened passenger better William Shatner or John Lithgow.

“They’re Heeerree!” Marathon:  Start with a couple Twilight Zone episodes:  “Long Distance Call” (Season 2, Episode 22) and “Little Girl Lost” (Season 3, Episode 26) and then the movie Poltergeist (1982).  Do not bother with any of the sequels to the movie!

Of course, for something that will really keep you up nights with bad dreams, you could watch non-cable television and all the political ads that have been underway for several weeks now, given the upcoming mid-term elections.  Our choices—and views of our political reality?  Now that’s really scary!  Don’t forget to vote!

HOW DID YOU CELEBRATE HALLOWEEN?

DID YOU ENJOY BEING SCARED?

A Few Treats for You!