Saturday, 14 June 2104, is Flag Day!  How are you celebrating? Maybe by flying an American Flag?  Share your plans and thoughts in the comments. 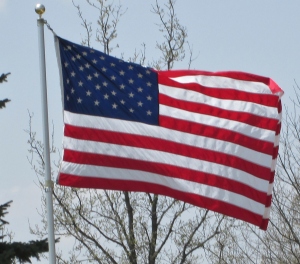 My dad always proudly flew the American Flag on all national holidays as well as on Flag Day, which is not an official federal holiday.  Dad has been on my mind a lot lately.  This is the first Father’s Day since his death in February.  Earlier this month, he and Mom would have been married 73 years. I remember how proud he was—we both were—when we watched Buzz Aldrin plant the American flag on the moon as part of Apollo 11’s historic mission in 1969.  In memory of Dad’s love of the American Flag, I decided to review the flag’s history as part of my celebration of this year’s Flag Day observance.

HISTORY OF THE AMERICAN FLAG

Many Americans will tell you that Betsy Ross made the first American flag at the request of George Washington back in 1776.  These days, that story is more often seen as just that—a story. At least, the details of the story cannot be verified, and others claim to have been involved in making the first flag.

What is not in dispute, however, is the Flag Resolution adopted by the Second Continental Congress on 14 June 1777:  “Resolved, That the flag of the thirteen United States be thirteen stripes, alternate red and white; that the union be thirteen stars, white in a blue field, representing a new constellation.”  This resolution created the basic parameters for the American Flag, but the exact design and configuration were not dictated.  Some early flags used 6-point rather than 5-point stars, and others placed the original thirteen stars in a circle not in the box-format that became standard.

In 1795, after Vermont and Kentucky became states, the number of stripes on the flag increased to fifteen.  This fifteen-stripe version was flying over Fort McHenry in 1814 when Francis Scott Key wrote what later became the national anthem.  In 1818, Congress passed a plan that formalized the design of the flag, keeping it at thirteen stripes for the original thirteen colonies and one star for each state. The plan was that the flag would officially increase its number of stars on the first 4th of July after a new state joined the union.  Hawaii was the last state to join the union in 1959, so the current 50-star configuration has been in existence since 4 July 1960.

In 1916, President Woodrow Wilson officially proclaimed 14 June as Flag Day.  It commemorated the resolution made back on 14 June 1777, establishing the parameters of the flag’s design.  In 1949, an Act of Congress established National Flag Day, although the day was not made an official federal holiday. Pennsylvania is the only state that celebrates Flag Day as an official state holiday.  President Barack Obama’s June 2010 press release explains the continuing significance of the American Flag and its importance to the country:

“On Flag Day, and throughout National Flag Week, we celebrate its lasting luminosity, and the enduring American story that it represents.  Although the configuration of stars and stripes has changed over the years it has been flown, its significance and symbolism have not wavered. The flag that once helped unite a new Nation to confront tyranny and oppression still flies today as an unequivocal emblem of freedom and liberty.” 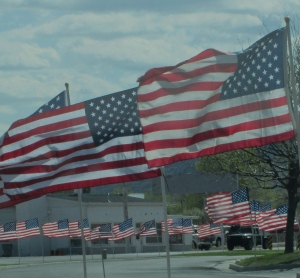 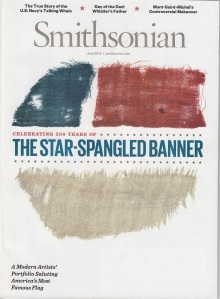 This year’s Flag Day also celebrates the fact that Francis Scott Key wrote the national anthem 200 years ago.  The June 2014 issue of Smithsonian, the publication of the Smithsonian Institute, celebrates this historic accomplishment in the article “The Star-Spangled Banner: Celebrating 200 Years.”  This article opens with the following historical review:

“As national treasures go, it was a bargain:  $405.90, paid to Mary Pickersgill of Baltimore, who fashioned it from red, blue and undyed wool, plus cotton for the 15 stars, to fly at the fortress guarding the city’s harbor. An enormous flag, 30 by 42 feet, it was intended as a bold statement to the British warships that were certain to come. And when, in September 1814, the young United States turned back the invaders in a spectacular battle witnessed by Francis Scott Key, he put his joy into a verse published first as “Defence of Fort McHenry” and then, set to the tune of a British drinking song, immortalized as the “The Star-Spangled Banner.” The article announces a nationwide singalong that will take place on Saturday, 14 June, at 2:30 pm EST.  This Anthem for America is available for live viewing online.  The rest of the article showcases “Broad Stripes and Bright Stars,” new artwork inspired by the flag, by this impressive national icon.  The Smithsonian presents these new artistic renderings as “proof that the anthem and icon are as powerful as ever” but leaves it to the viewers to decide whether they will be “inspired” or “provoked” by the artists.  A variety of mediums are presented as part of this artistic review, including musical performances. Peter Halley, a painter, presents a flowing photomontage, and The Ralph Lauren Studio presents a banner tribute.  You can experience all the artwork online. 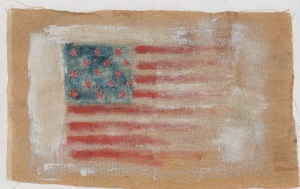 NOW, PLEASE STAND FOR THE SINGING OF THE NATIONAL ANTHEM!

I consider myself patriotic, but I bet we do not all define patriotism the same way or agree what actions demonstrate patriotism.

“We, the people, recognize that we have responsibilities as well as rights; that our destinies are bound together; that a freedom which only asks what’s in it for me, a freedom without a commitment to others, a freedom without love or charity or duty or patriotism, is unworthy of our founding ideals, and those who died in their defense.”  Barack Obama

“Nationalism is an infantile disease.  It is the measles of mankind.”  Albert Einstein

“America was not built on fear. America was built on courage, on imagination and an unbeatable determination to do the job at hand.”  Harry S. Truman

“Patriot:  the person who can holler the loudest without knowing what he is hollering about.”  Mark Twain

“True patriotism hates injustice in its own land more than anywhere else.”  Clarence Darrow

“I look forward to a great future for America—a future in which our country will match its military strength with our moral restraint, its wealth with our wisdom, its power with our purpose.”  John F. Kennedy

“The love of one’s country is a splendid thing. But why should love stop at the border?”  Pablo Casals

“I realize that patriotism is not enough. I must have no hatred or bitterness towards anyone.”  Edith Cavell

“The highest patriotism is not a blind acceptance of official policy, but a love of one’s country deep enough to call her to a higher plain.”  George McGovern

“A real patriot is the fellow who gets a parking ticket and rejoices that the system works.”  Bill Vaughan

“Patriotism has served, at different times, as widely different ends of a razor, which ought to be used in keeping your face clean and yet may be used to cut your own throat or that of an innocent person.”  Charles Edward Montague

“Real patriotism is a willingness to challenge the government when it’s wrong.”  Ron Paul

“Heroism on command, senseless violence, and all the loathsome nonsense that goes by the name of patriotism—how passionately I hate them!”  Albert Einstein

“I do this real moron thing, and it’s called thinking. And apparently I’m not a very good American because I like to form my own opinions.”  George Carlin

“A patriot must always be ready to defend his country against his government.”  Edward Abbey

“In the face of impossible odds, people who love this country can change it.”  Barack Obama

“I love America more than any other country in the world and, exactly for this reason, I insist on the right to criticize her perpetually.”  James Baldwin

“Patriotism is supporting your country all the time and your government when it deserves it.”  Mark Twain

“It is not always the same thing to be a good man and a good citizen.”  Aristotle

WHAT DOES PATRIOTISM MEAN TO YOU?