It’s the time of year when even adults often take some time to be silly in public, sharing candy and dressing in costumes.  When I was in the classroom (college writing classes), I would occasionally wear a cat nose of bunny ears to class.  But I really liked giving extra credit points to someone who wore a costume all throughout class when Halloween fell on a class day.  (OK, they also had to write a 200-word minimum paragraph about their costume choice that was perfectly proofread!)  The caveat was that the costume had to be a real, not just “being a student” or something like that.  My favorite was the nun in class—who needed the points—who created a great costume by simply adding a mask.  A Frankenstein full-face mask. Over her to-the-floor black habit.  Well, she wore clunkier shoes too, as I recall.  She was tall, close to 6 feet.  It was an impressive costume!  And I loved seeing the other students figuring out it was okay to laugh with the nun about her costume! 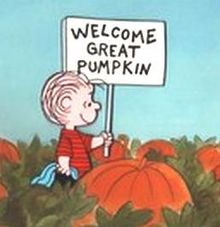 There are other things I like about Halloween.  Linus and the Great Pumpkin Patch come to  mind. So does trick-or-treating.  As a kid, we roamed quite a ways, but that was before the scare of needles in apples and such.  These days I rarely have trick-or-treaters at the door. But I always make sure I have candy on hand to share.  And seeing little kids in costumes is just so fun.  I always had fun carving jack-o-lanterns as well, although mine were never as creative as those in this video.

I also like scary aspect of Halloween.  Haunted Houses.  Creepy decoration displays.  I would love to have a bat, a real one with wings.  It would be cool to have one that would zip down from the eaves to dart (not attack really) the trick-or-treaters.  I also like scary movies.  Not the Halloween and Scream series—I am not into blood, guts and gore. I have never really given Zombies a chance, but should because several blogging friends have shared their delight in that minority group.  I like things like vampire and Frankenstein episodes of the X-Files, the old Twilight Zone and Outer Limits series, the old sci-fi movies such as the originals of The Day the Earth Stood Still or Invasion of the Body Snatchers.  Poltergeist is a good movie too—“They’re here!”

I especially like the opening and closing scenes of Twilight Zone: The Movie, when the ambulance guy pulls over on the dark road, and pulls off his human looking mask just after asking, “Hey, wanna see something really scary?” And what’s better than the creature on the wing episode, either the William Shatner original or the John Lithgow movie remake?  I have not decided what to watch this holiday weekend. Any suggestions?

But I do have something really scary to share with you right now.  Brace yourself. You might not want the kids exposed to this.  Even if you do not believe, what comes after the image is truly frightening. 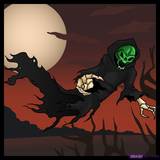 Christmas is exactly two months away!

If you want to be scared by hearing Weird Al Yankovic’s “Another One Rides the Bus” again with a better chance of understanding the lyrics, here’s another video.