NO REST FOR THE DEAD: One Mystery, Many Authors

I always enjoy a good murder mystery, especially in the summer when I can lounge at the beach or curl up on the couch inside with the air conditioning.  These novels—although maybe not great literature—offer strong characters, intriguing plot twists, and exciting settings. The suspense of the mystery or thriller keeps me engaged, but the plots are not so intricate or themes so profound that I cannot be interrupted and keep continuity.  If I doze off while reading, no problem.  I can pick right back up again!

If I find a mystery author I like, I go back over and over.  Some of my go-to authors include Laurie King’s Mary Russell and Sherlock Holmes series, Janet Evanovich’s Stephanie Plum series, Tony Hillerman’s Jim Chee and Joe Leaphorn series, Sue Graftson’s alphabet mystery series, and James Patterson’s Women’s Murder Club series.  But I am always open for a good mystery to read, a new author to explore. 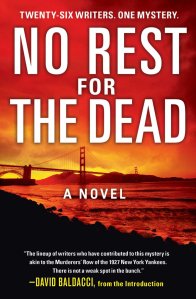 A few weeks ago I was intrigued by a new title—No Rest for the Dead—because of its author.  I actually should say authors, plural.  What caught my eye about this tome was that it was a group project, written by 26 different mystery writers.  You know the concept of a progressive dinner?  Start a meal in one place and move on to another location for the next course?  That is how this book was created, a progressive draft where different authors wrote different chapters.

David Baldacci (author of King & Maxwell series) wrote the introduction to this collective endeavor and explained what a magnificent feat this joint project really was: “This is a rare thing indeed because mystery writers are notoriously reclusive, paranoid, and unfriendly folks when it comes to their work. . . .  While they each deliver their own signature brand of storytelling to the novel, it is startling how these writers. . . have woven a yarn that seems to be the product of one mind, one imagination (albeit schizophrenic).”

And Baldacci was right:  No Rest for the Dead is an impressive collaboration. I was intrigued by the authors themselves, some of whom I had read before and enjoyed.  All are successful in their own ways, most having been on the NY Times Bestsellers List many times.  The 26 authors who worked together to create this murder mystery are listed below basically in order of the appearance of their contributions in the novel.  I have added a little info about the couple of authors that I have read before and liked:

I was also intrigued by No Rest for the Dead because of what prompted this extreme collaboration.  The idea of an anthology of mystery short stories that would generate income for cancer charities originated with Andrew J. Gulli, managing editor of Strand, the number one magazine for mystery and short story writers.  A friend of his, now late, suggested making the project a novel with many authors as a better way to entice readers.  That change helped the idea coalesce, and soon authors were coming on board for the project.  Gulli and his sister Lamia Gulli edited this jointly written novel. Other than payments to authors all proceeds are going to Leukemia & Lymphoma Society.  According to LLS, 148 people die from blood cancer every day.  Helping cancer research is a great cause!

Of course, the book will only sell and raise money for LLS if No Rest for the Dead is a good novel.  Fortunately, it is.  As the novel opens, the readers are aware that the woman convicted of killing her husband was put to death for his murder ten years ago.  But now, the main detective who helped convict her feels he was wrong and that an innocent woman was killed.  This former police detective, Jon Nunn, has been obsessed for the past decade with trying to find the truth.  This opening sets up a great dynamic, generating interest and suspense in finding the truth.

The plot unfolds in a two-part structure.  After the opening setup, the readers are taken back in time to just before the murder, so all the suspects and their actions can be clarified.  The murder victim is seen as arrogant and condescending, and many people have motive to kill him.  I don’t want to say that I cheered over the fact that he had been bumped off, but I was not very sad.  Then the readers are returned to the present when all these players are being brought together on the 10th anniversary of the convicted murderer’s death.  Current intrigue shows that someone is working to thwart the detective’s ongoing investigation to find out the truth.  As a reader, I was quickly committed to the plot, wanting desperately to know the truth about this murder.

Overall, No Rest for the Dead is a fun summer read. If you like murder mysteries, you will not be disappointed.  The characters are engaging, the action is compelling, and the final resolution offers a surprise twist.  I even stayed up one night to read just one more chapter. And then another.  But this mystery is also a good read for those who value the art of writing itself.  I was impressed by the smooth transition from one chapter to the next as new authors picked up the story and carried it forward.  The varying writing styles melded together well.  In fact, I was able to forget that so many different voices were penning this cohesive presentation.   I echo Baldacci’s comment on the success of this writing experiment:  “It’s hard what these writers have done. Give them their due.”

My final analysis?  Give it a try!  If you end up not liking No Rest for the Dead, most of your $10 will have gone to LLS.

SOME QUOTES ON MURDER MYSTERIES (SORT OF)

“Novels are written word by word. If you can write a word, and then another word, you can write a novel—assuming your novel will be two words long. Here’s a two-word romance novel: I do. It’s also a murder mystery.”   Jarod Kintz

“Murder is easy, if no one suspects you.”  Agatha Christie

“The lady in the liquor store sold me a fifth of whiskey and the landlord’s name without taking her eyes off the book she was reading.”  Andrew Cotto

“I specialize in murders of quiet, domestic interest.”  Agatha Christie

“One must never set up a murder.  They just happen unexpectedly, as in life.”  Alfred Hitchcock

“There are 4 kinds of homicide: felonious, excusable, justifiable, and praiseworthy.”  Ambrose Bierce

“What the detective story is about is not murder but the restoration of order.”  P. D. James

What are your best summer reads?

If you read murder mysteries, share some favorite authors!