A Good Use for Drones! Really. Watch the Video

When you hear the word DRONE, what’s the first thing that comes to mind? 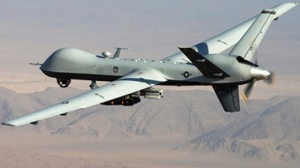 For me, it is danger, invasion of privacy, drone strikes meaning killing. Calling a drone a UAV—unmanned aerial vehicle—does not undermine the negative connotation.  In fact, I bet many might guess the “A” in UAV could stand for “armed.”   An article in The Guardian explains that more and more countries are trading or selling drones for military use.  That fact is not comforting.

When I went online and plugged drones into a search engine, most of the top options that appeared were to buy them along with some info on Do-It-Yourself Drones.  Sure, there are people who buy the kits available online for benign uses such as flying over parks and such, but even those can create problems or be used for wrong-doing.  Most drones are used for military and civil applications like policing, firefighting and security surveillance, and they are used for missions that are too “dull, dirty or dangerous” for manned operations.

My general sense has been that drones are a technology that has more potential for problems than solutions, a technology that has already been used too often with deadly results.  One article—“How to Stop Worrying and Love Drones”—says the technology does not warrant the stigma that is attached to it.  Apparently part of the negative reaction to drones is the general qualms most people have about change of any kind.  One idea shared in the article is to make drones even more commonplace by getting kids building them in science classes, so drones can be better understood and appropriate use can be part of the process.

Noble goal, but I am still skeptical.  I guess I am one of the 63% of Americans that—according to a PEW Research survey—worry an increase in personal and commercial use of drones would just make things worse.

Then I saw this video.  It shows a great use of drones to help in the fight against poaching elephants for their tusks and rhinos for their horns.  It is a great experiment by the Charles A. & Anne Morrow Lindbergh Foundation that works to balance technology and the environment.  This specific project is called Air Shepherd and uses drones to track and stop poachers.  And the pilot program has been a success.  I am thrilled Air Shepherd is working to help elephants and rhinos.  In fact, I plan to donate to the foundation to expand this project into more countries.  But in the broader sense, Air Shepherd is also a great reminder that it is never the technology, the tools, that are either good or bad, but the people who put them to work.

SORRY:  This video has been removed from viewing, even though I can still see it on Facebook.  Here are two different links that should get you to the video on the use of drones to fight poaching:  One via IndieGoGo and the other via Facebook.

I applaud the people at the Lindbergh Foundation and especially those working on Air Shepherd.  They have given me hope, even in the face of drones flying overhead.  That is a change I can embrace!  If you are interested in making a donation to Air Shepherd, visit IndieGoGo.

“It has become appallingly obvious that our technology has exceeded our humanity.”  Albert Einstein

“This is perhaps the most beautiful time in human history; it is really pregnant with all kinds of creative possibilities made possible by science and technology which now constitute the slave of man—if man is not enslaved by it.”  Jonas Salk

“The real problem is not whether machines think but whether men do.”  B. F. Skinner, 1969

“The machine does not isolate man from the great problems of nature but plunges him more deeply into them.”  Antoine Saint Exupery, 1939

“We’ve arranged a civilization in which most crucial elements profoundly depend on science and technology. We have also arranged things so that almost no one understands science and technology. This is a prescription for disaster.  We might get away with it for a while, but sooner or later this combustible mixture of ignorance and power is going to blow up in our faces.”  Carl Sagan

“If we continue to develop our technology without wisdom or prudence, our servant may prove to be our executioner.”  Omar Bradley

“Historically, the development of machines had amplified man’s ability to destroy.”  Edmund Cooper

“The most exciting breakthroughs of the 21st century will not occur because of technology but because of an expanding concept of what it means to be human.”  John Naisbitt

“Computers are magnificent tools for the realization of our dreams, but no machine can replace the human spark of spirit, compassion, love, and understanding.”  Louis Gerstner, CEO, IBM

The Hope of Spring

Comments on: "A Good Use for Drones! Really. Watch the Video" (5)