I was lucky enough to view the California half of Christo’s: The Umbrellas Joint Project for Japan and U.S.A. in October 1991.  I originally wrote about that experience in October 2011 on the 20th anniversary of the exhibit.  It seems so long ago!  However, no matter how much time has passed, blog statistics tell me that every week several people visit that original Christo post, finding it through various search engines.  The attention it gets is a bit surprising, especially since it did not get that many views when it was first published. But I do love that Christo’s art remains popular! 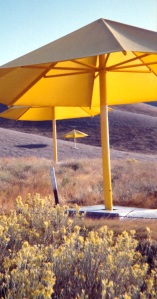 I now live in Bakersfield.  Every week, when I drive from Bakersfield to Los Angeles, I travel the route the umbrellas were placed along Interstate 5.  The bushes along the way currently showcase the annual golden blooms that so accentuated the umbrellas back then.  Seeing the autumn colors makes it difficult to not think about the umbrella exhibit as I drive.  On some trips, the umbrellas seem so evident across the horizon that I swear I see them dotting the hills and filtering the sunshine.

Maybe that’s the power of art at work.  After the initial viewing, the art stays with the viewer as memory, insight, altered perspective, bringing the art to mind over and over again.  I have not seen any other of Christo’s art displays, but his approach—to take over public spaces and create art that cannot be ignored—interests me.  Maybe I will track down one of his new displays at some point via his website. But for now, I enjoy my memory of the umbrellas every time I drive the route. 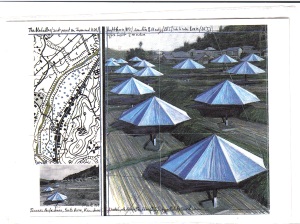 To enhance my memory, I reviewed my original post the other day and discovered that the video I shared in that post is no longer available.  I added a new video in its place, so the original post would remain complete.  When I was searching for new videos, I discovered some videos about the Christo Umbrellas that I had not seen two years ago.  They caught my eye because they showcase the Japanese half of the display.

The first is short but gives an aerial view of both routes and is punctuated with comments from the artist and his wife.

The second takes the viewer on a drive along the entire Japanese route!  The last few minutes are the best.  The view stays the same as if you are sitting there by the river, and you can hear the river water gurgling.

“Art washes from the soul the dust of everyday life.”  Picasso

“The aim of art is to represent not the outward appearance of things, but their inward significance.”  Aristotle

“Art is not what you see, but what you make others see.”  Degas

“To be an artist is to believe in life.”  Henry Moore

“There are painters who transform the sun into a yellow spot, but there are others who, thanks to their art and intelligence, transform a yellow spot into the sun.”  Picasso

“Art is the proper task of life.”  Nietzsche

“Without art, the crudeness of reality would make the world unbearable.”  George Bernard Shaw

I cannot say that Christo is my favorite artist, but his work made an impression on me.  What artist or art work stays with you?  Who is your favorite artist?  What do you see as the power and role of art in our society?

Oh, Yosemite in the Fall!